Warm up the busses Warriors - you're going to the Super 7 in Auburn.

Jacob Kelley's Cherokee County Warriors left no doubt they belong in next Friday's 4A state title game at Jordan Hare Stadium at Auburn University. They did it in convincing fashion doubling up region foe Oneonta 42-21 to punch their ticket into the Super 7 for the first time since 2009. The win was especially sweet because it avenged an early September loss to the Redskins.

“We felt really bad the way that game ended up there,” Kelley said after the win.

“Rarely do you get a chance to get a do-over with one of your losses. We wanted tonight...hoping it would turn out that we'd get to play them again in. Nothing against them. We let the first game get away from us in the 4th quarter. We just wanted to right that wrong from that night.”

Cherokee County sprinted out to a 14-0 lead at the half. The Warriors first touchdown of the night came on a Jack Amos 10 yard touchdown run. The Warriors' second score of the game came when Jacob Cornejo took off on a 41 yard break-away to the end zone.

Oneonta finally got on the board with a little over five minutes remaining in the 3rd Quarter on a Fluff Bothwell 49-yard touchdown run. Cherokee County answered on their next possession with Cornejo’s 7-yard run. 28-7 Centre going into the 4th and the Warriors never looked back.

Cornejo posted another big night, accounting for a couple of touchdowns and 310 rushing yards. Amos finished the game with 52 yards on seven carries with three touchdowns. Former FNN Player of the Week, QB Cade Hopper completed 3-of-5 passes for 96 yards.

Now 12-2, Cherokee County will face 13-1 Andalusia (13-1) in the 4A state championship game inside Jordan-Hare Stadium on Friday morning at 11 AM. Like the Warriors, Andalusia avenged a regular season loss by defeating Catholic-Montgomery 29-26 in the other state 4A semifinal. The game will be televised on the AHSAA TV Network available for the first time state-wide on the Alabama Public Television Network. Those wishing to watch online can see the game coverage streamed on the NFHS Network.

FNN TO INTRODUCE TEAM OF THE YEAR AWARD AND PERPETUAL TROPHY STARTING WITH AWARDS NIGHT IN MARCH, 2023

You'll find most of FNN's content available for On Demand viewing on our YouTube Channel.  We also stream LIVE to YouTube for most of our events. 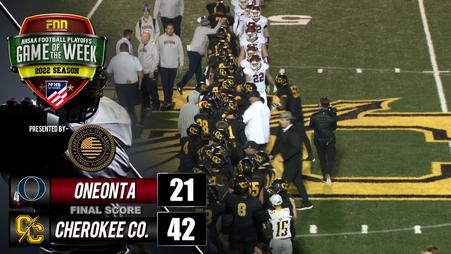 It is an award whose time has come.

At our annual Awards Night & Dinner in March 2023, FNN will award our first HIGH SCHOOL FOOTBALL TEAM OF THE YEAR Trophy.

The network will choose from four area teams to be eligible for selection.  Blind ballots will be distributed to twenty area high school coaches with instructions to vote for one of the four teams.

Unlike our Coach and Player of the Year Awards, the Team Of The Year will not be required to have appeared on FNN's GAME OF THE WEEK during the season.

"Our goal here is to award the absolute best football team performance of each season," states FNN's Jim Jacobs.

The team selected will receive a TEAM OF THE YEAR trophy for that season for their trophy case, and the school will also be given possession of the FNN TEAM OF THE YEAR perpetual trophy and pedestal to proudly display in their school until the next season's winner is announced.

And unlike FNN's Coach & Player of the Year Awards, the Team Of The Year Award will be presented at the beginning of the Awards Night & Dinner festivities to kick off high school football's most anticipated evening.

Bring the FNN 24/7 Live Channel to your TV in HD by adding our private channel code to your Roku device.  CLICK HERE to visit our Viewing Tips page where you'll find step-by-step instructions on how to add FNN to your Roku channel menu

WE LOVE GETTING TO KNOW OUR VIEWERS & FANS!

​
If you love high school sports as much as we do, then you'll want to receive our new FNN INSIDER Newsletter in your email inbox!  Signing up is easy and free.  Just enter your email address in the box below and click the "Subscribe" button and you're all set!  You'll receive our FNN INSIDER Newsletter with stories on upcoming FNN telecasts and events, plus some special INSIDER-ONLY offers from the businesses that support FNN.  Don't wait - SIGN UP TODAY! 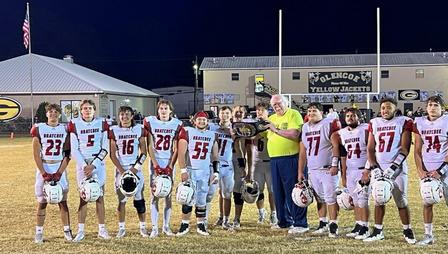 FNN's Jim Jacobs holds the BATTLE FOR THE BELT championship belt surrounded by members of the winning team, the Ohatchee Indians